MND NSW vice patron, Paul Brock AM, died on 25 March 2016 from MND. The board, staff and members of MND NSW offer their condolences to Paul's family, friends and work colleagues at NSW Department of Education. Paul was on the board of MND NSW from 2002-2006. He accepted the role of vice patron of MND NSW in May 2007, and continued in that role until the present. Paul was an inspiring educator, speaker and writer, and he never tired of advocating for the rights of people with a disability, particularly those with MND. Additionally, he was committed to raising awareness about the need for research into MND.

The symposium is the largest medical and scientific conference specific to MND and is the premier event in the MND research calendar for discussion on the latest advances in research and clinical management. Call for Abstracts is now open - the abstract deadline is Friday 27 May 2016.

Health, disability, aged and community care professionals are invited to submit an abstract for an oral or poster presentation related to the conference themes for the 8th National MND Conference 12 September, 2016 - Melbourne. Abstracts must be submitted by 30 May 2016. 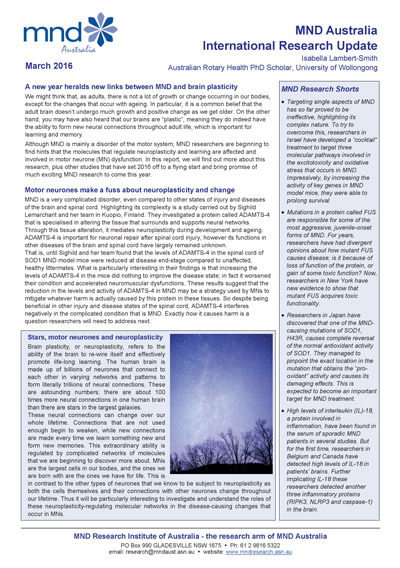 This research update is produced by the MND Research Institute of Australia - the research arm of MND Australia. Read the latest MND research news.