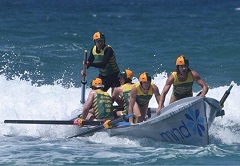 David Hammond’s 53-year-old sister Jane was diagnosed with MND so he decided to sponsor a new North Cronulla Surf Lifesaving Club surfboat emblazoned with MND awareness details and dedicated it to not only his sister Jane’s fight but also to Peter Whitford, a North Cronulla club stalwart who had died from MND. In February the North Cronulla U23 crew represented NSW (in the interstate series) and Australia (in the Trans-Tasman series against NZ) at Eloura Beach, NSW, winning both in Jane’s boat. The North Cronulla Open Women’s team also raced in Jane’s boat and placed 1st in the Australian Surf Rowing League 2018 Championships. Well done all.

EntertainmentTM Memberships include over $20,000 worth of valuable 2-for-1 and up to 50% offers from many of the best restaurants, arts, attractions, hotel accommodation, travel and much more! Pre-purchase your 2018-19 book or electronic membership before 6 April to receive Early Bird Offers you can use straight away. 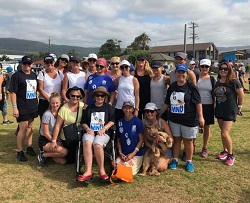 Illawarra turned on a beautiful day for our first Walk to d’Feet MND of the year Over $20,000 was raised with 356 families and friends showing their support for people living with MND and walking in memory of a loved one lost to this dreadful disease. A big thank you to the Bulli Surf Club who hosted this event again this year. The Surf Club have supported this event since its inception six years ago. Thank you also to our local co-ordinator Shelly-Anne Demirov and the many volunteers who give up their time to assist at this event. Thanks also to the crew from the Woonona Lions Club who always provide a yummy sausage sizzle. Well Hunter it’s time to see what you can do. 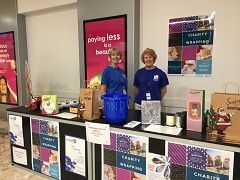 Congratulations to Wendy Whitmore and her helpers who raised $2,300 from a Christmas Wrapping Fundraiser - double what was raised the previous year! Since 2013 Wendy has been supporting MND NSW with various fundraising activities on the Central Coast. Thank you Wendy for your continued support.

The MND NSW e-news February 2018 edition was emailed to members and subscribers on 1 February. You can read this edition here. Get the e-news delivered your inbox by subscribing to the MND NSW e-news.