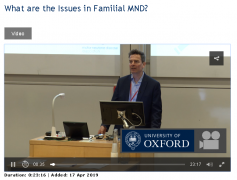 Videos from the 17 April 2019 Families for the Treatment of Hereditary MND (FaTHoM) meeting organised by the University of Oxford are now available free online. MND clinicians-researchers presented on topics such as genetics of MND, genetic testing and gene therapies. Below you can find out more about what was presented on the day

and links to the videos of recorded talks. (From https://mndresearch.blog/2019/06/20/fathom-2-uk-leading-mnd-clinicians-on-inherited-mnd/)

Introducing the rationale of the meeting, Prof Martin Turner set the scene by explaining the great difficulty in understanding the disease due to its many possible causes. Being such long cells, many things can go wrong in the motor neurones and in the vast amount of their support cells (such as astrocytes or microglia). But one factor can help us understand the disease better – genes.

Around 5-10% of MND is considered familial. That is, around 1 in 15 people have had someone in their family affected by this disease in the past, making them more likely to develop the disease themselves. Specifically, if we consider the ‘multistep hypothesis’ of MND which assumes that six steps have to happen in our lifetime for the disease to develop, a mistake in a specific gene may reduce the number of the necessary steps to four or even two (read more about the impact of genetic on the multistep hypothesis here).

Lots of Prof Turner’s work focuses on identifying biomarkers of the disease that could tell us more about the pre-diagnostic symptoms that are not immediately visible, as it is thought that changes in the body occur years before the onset of symptoms, by which time it is estimated up to 50% of motor neurones have died.

In one of his previous projects using a brain imaging method called magnetoencephalography (MEG), he found changes of brain activity in specific regions when comparing healthy people to people with MND, but also when comparing them to asymptomatic gene carriers, showing that some changes are already present in people with the potential to develop MND.

By identifying a specific marker that would show whether a gene carrier is likely to develop MND, treatments such as riluzole could be given in much earlier stages, potentially further delaying onset of the disease.

Getting genetically tested – what to be aware of?

In order to receive a treatment for suspected MND, a person with a familial link to the disease first needs to know whether they carry the genetic mistake. But getting genetically tested isn’t an easy decision to make as it can affect many other family members as well as wellbeing of the person being tested. This is especially true of a disease that is not fully penetrant – that is, when inheriting a faulty gene doesn’t guarantee that the person will develop the disease.

A clinical geneticist, Prof Anneke Lucassen of University of Southampton, provided an overview into the ethics of genetic testing and posed questions some people might be thinking, such as ‘Will my unborn grandchildren be affected?’ or ‘Why can’t children be genetically tested?’.

The value of online shared experiences

Although not restricted to inherited MND, support is an important factor when going through any serious health condition. Prof Louise Locock of University of Aberdeen, a social scientist who is interested in understanding the social experience and context of a disease, introduced us to her work on the healthtalkonline.org project that captures people’s experiences living with various conditions, including MND.

This online resource aims to gather people’s narratives about their experiences to provide practical information and support when going through illness, and it currently covers over 100 conditions. One of the things Prof Locock discussed was the existential shock of getting a diagnosis of MND, and how people worked to restore some kind of sense of normality in their lives using different strategies.

The outcome of this project has been very well received by people living with MND, saying that they felt reassured and less alone after using the website and better prepared for what may happen to their health.

This project is now being further extended to include experiences of families living with inherited MND and the researchers are looking for participants to join their advisory group or to take part in an interview outlining the issues families face when dealing with MND.

Perhaps the most awaited session was on gene therapy, which was led by Prof Christopher McDermott from University of Sheffield. During the talk, Prof McDermott introduced us to the different stages of clinical trials and what is needed to get a drug from its initial discovery all the way to approval, assuring its safety across the different phases. And although the important question of whether the drug works is monitored throughout, it only becomes the main focus once safety and correct dosage have been established.

He then went on to explain the rationale behind the SOD1 antisense oligonucleotide gene therapy, which involves injecting the treatment into the spinal cord to prevent faulty disease-causing proteins from being made.  This treatment has already shown reduction of the toxic SOD1 proteins in people receiving the treatment, with signs of functional improvement (read more about the Phase 1 results here). We were very lucky to hear from one of the trial participants, Dani, who shared her experience receiving the treatment and going through a clinical trial. You can see the full interview with her and the associated Q&A session below.

The future of treating genetic MND

In the final talk of the day, Prof Kevin Talbot built on the previous sessions by looking at the future of precision medicine, and some of the hurdles that still need to be overcome. He went on to explain how gene therapy works and how it can be delivered to cross the blood-brain barrier and reviewed the recent successes of gene therapy in Spinal Muscular Atrophy.