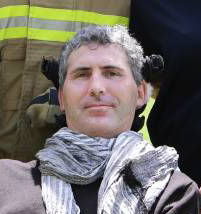 Dr Justin Yerbury, MND researcher from UOW: University of Wollongong, Australia was named Wollongong’s Citizen of the Year at the Australia Day Awards ceremony on Tuesday night. For over a decade, Dr Yerbury has been actively involved in motor neurone disease advocacy, fundraising and research. Not only has he worked internationally, but has built a world recognised MND research group in the Illawarra. Photo: Illawarra Mercury