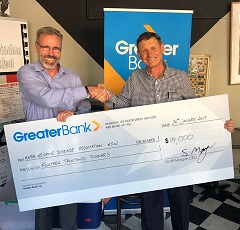 A very big thank you to Nick Moretti (pictured left with Graham Opie, MND NSW CEO) and his wonderful team from the Newcastle Italian Film Festival. This is the 5th year the Festival has supported the work of MND NSW with the most recent Festival raising $14,000. A huge achievement. 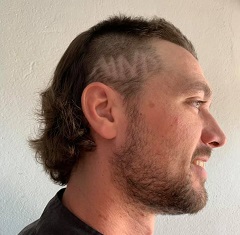 Thank you to the Kootingal Hotel and their amazing supporters who have raised over $16,700 for motor neurone disease from their Mullets for MND event. The idea for the event was to raise awareness and funds, and to have some fun along the way. The months of mullet growing culminated in a day of family fun, live music and the mullet judging competition. Thank you to the Kootingal community for your support.

It has been approximately two years since I was diagnosed with motor neurone disease. In that time the strength in my arms and hands has gradually declined to the point where I have gone from being able to use a computer keyboard and mouse (and mobile phone) without difficulty, then with difficulty and now not at all. Obviously, this has had a significant impact on my ability to communicate and remain (semi–)independent and active.

From an early stage I started investigating options that would allow me to have access to a computer so I could use the Internet, send and receive emails and text messages and use of my mobile phone remotely et cetera. I have also spent time investigating some of the voice recording/synthesis options that are available for people with MND. Although I don’t need this type of assistance yet (or, hopefully, in the near future) all the information I read suggested it is better to "bank" your voice sooner rather than later.

I thought it might be useful if I shared my experiences with assistive technology that aids with communication when your ability to use your hands is limited or non-existent. (This article has been written using some of the equipment described below.)

Although it takes a bit more organising, it is possible to find suitable accommodation and travel if you have MND. Here are some places to start.

Are you caring for someone with MND in NSW? Would you like to be part of a telephone support group that focuses upon building your strengths as a carer? Through MND NSW’s continued partnership with Carers NSW, their National Counselling program offers MND carers the Carer Well Being Talk-Link Program. The next program is commencing Tuesday 12 February 2019 and this six week telephone support group is free and suitable for anyone who is caring role. Find out more here.