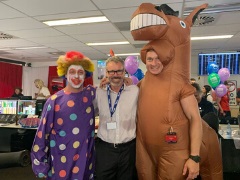 In the lead up to Christmas, we celebrated alongside the team at ICAP Sydney as one of the chosen charities lucky enough to be selected to take part in the ICAP Charity Day held on Tuesday 10th December. Steve Nixon, a broker at ICAP in Sydney, nominated MND NSW as a chosen charity in memory of his brother who he lost to MND.

What is the ICAP Charity Day?

Each year, ICAP Charity Day donates 100% of the revenues and commissions generated by the brokerage over the entire day to charities across the globe. With hundreds of charities vying to take part we were so grateful ICAP decided to include us as one of the twelve Australian and New Zealand charities selected.

Many staff members expressed that it’s ‘the best day of the year’ and that they and their clients often hold off their biggest trades and schedule them for the day so they can raise as much money as possible.

The energy at the event was electric and not just because we spent the day on the trading floor.

All staff were in fancy dress with each team selecting a theme including the Avengers, the circus, country and western and pirates. Each team were competing with each other to take out the prize for the best dressed. They’d also themed their workspaces with the most incredible decorations and it was amazing to see their giving spirit in action.

Best of all, the brokers were kind enough to let all the charity teams present get involved, including our fundraising manager, Kym Nielsen, who completed a trade with the help of the Hulk.

‘We’re so grateful we were able to be part of the ICAP Charity Day because events like this make a real difference to organisations like ours,’ Kym said. ‘All proceeds will go toward buying new electric wheelchairs which we can loan out to people with MND and which are valued at $15,000 each.’

All equipment is loaned free of charge to people with MND aged 65+ who do not qualify for NDIS.

Thank you to ICAP

We want to say a huge thanks to ICAP and especially to Steve Nixon for nominating us as a chosen charity.

If you would like to organise a fundraiser for MND NSW through your workplace, contact us at This email address is being protected from spambots. You need JavaScript enabled to view it.