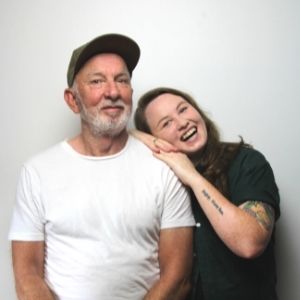 When Lily’s Dad was diagnosed with Motor Neurone Disease in July last year, at first she thought he was going to say that he had cancer. Lily was preparing for that, as she’d already lost so many family members to cancer in recent years.

But when she found out her Dad had MND, she realised that she had no idea what it meant. Even though she had participated in the ice bucket challenge years earlier, she realised she didn’t know anything about the disease or what impact it would have on her family.

“I think that when Dad could see that his speech was going funny, and he couldn't fix it, he kind of thought, ‘Well, maybe this is something serious.’"

Lily had no idea what it would mean for her Dad or what the future would hold. The only thing she could think to do initially was raise awareness with everyone around her.

“We've been telling all of our different connections, our friends, our family members and a lot of them are sort of learning what this disease is, for the first time.”

After an MND diagnosis, it’s common for people and their families to feel out of control. MND affects everyone differently so the uncertainty can be difficult to manage.

For Lily, she channelled this uncertainty into writing and performing a comedy show to raise much needed funds for MND.

“The thing that's provided my siblings and I with some control, is putting on this fundraiser and spreading awareness. We're just trying to educate as many people as we can because that's really all we can do.”

Since his diagnosis last year, Lily’s Dad has been doing well.

“He's got a good positive attitude, and he's very much in a, ‘Well, we've just got to live, and do as much as we can, while we can’ state of mind.”

But Lily knows that with MND it’s unique for everyone and progresses differently.

For now, it’s about making the most of whatever time they have, including spending quality time together as a family.

“We recently had a trip to Port Macquarie. That was really great because we used to do that all the time, when we were little. So we're having all of these good quality times together.”

“The goal, for me, is to educate the people that don't know what MND is, so they can provide support for those who are experiencing it.”

That’s why Lily is so passionate about raising awareness and fundraising for MND NSW. She knows there are many worthy causes out there but her message to you is:

"Please add MND NSW to your list, because there simply is just not enough education about it (motor neurone disease)."

Thanks to you, we’ve been providing support to people like Lily and their families for over 40 years. Your support means we can continue to make an incredible difference to people living with motor neurone disease for many years to come.