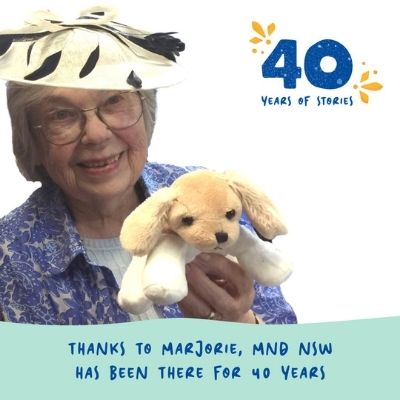 Marjorie is a one-of-a-kind, very special person. She started MND NSW back in 1981 (then known as Amyotrophic Lateral Sclerosis Society of Australia) after her husband, Bill, was diagnosed with ALS, the most common form of motor neurone disease (MND).

Back then, MND was barely heard of by most and anyone with a diagnosis felt extremely isolated and alone. Key information and advice was provided by doctors from overseas organisations such as the ALS Society of America, and mostly this proved to be incredibly difficult to obtain.

Marjorie and Bill decided to start a gathering, what would soon become MND’s very first support group. A comforting place where people could gather together and support each other, providing advice, information and even sometimes equipment.

It started out with family and friends at first, and then grew to include a group of volunteers who formed the Management Committee.

Marjorie’s objectives were clear from the beginning:

“Our aim was to provide practical information and support to people with MND and their carers, to promote public awareness of the disease and to encourage medical research into the cause and treatment of the disease.”

And it’s these key pillars that were built way back in the beginning that still remain the focus of MND NSW today.

“We also aimed to provide emotional support and to disseminate information concerning specialised medical and paramedical services, equipment and other support measures available to MND people and their families and to promote an interchange of ideas concerning patient management.”

From there, the organisation continued to grow. They moved to an office space in Croydon, NSW, hired a part time office manager and – most importantly – continued to raise awareness and much needed funds to help so many people who needed it.

Marjorie was a key leader in organising and promoting events and fundraisers, one of which was attended by the Duchess of York. It was a really busy time for a small committee and especially for Marjorie, who was leading all the core activities and functions of the Association in those early days.

“And then the work began to publicise the Association so as to reach people with MND through health professionals – GPs, specialist neurologists, OTs, Physios and Speech Pathologists, rehab units, hospitals and community health centres.”

Today, Marjorie’s story and invaluable contribution to MND NSW has not been forgotten. Marjorie remains involved with the organisation as a volunteer and enjoys seeing continued success and progress in supporting people living with MND and their families - this will always remain close to her heart.

Over the past 40 years people like Marjorie have been instrumental in helping us be there for thousands of people facing an MND diagnosis, just like her husband Bill did. Thank you for supporting us, especially our staff and volunteers like Marjorie. Thanks to you, we are continuing to make an incredible difference to people living with Motor Neurone Disease.